Innovations in Food Production – What Will We Find on Our Plates in Future?

The steadily growing world population is creating an ever-increasing demand for food. At the same time, crop yields are declining and more and more agricultural land is needed. This has negative environmental impacts, as forest areas are cleared and intensive forms of agriculture are practised, for instance. Food production is thus a major factor in climate change.

Though consumers have an increased awareness of and interest in sustainably produced food, many people also dislike the idea of restrictions. While some people call attention to the environment and climate damage, others worry about rising food prices. The debates show that food is both a global and an individual issue. So what can be done?

This topic was addressed by BIO.NRW in a webinar on 17 March entitled Food Innovations with Biotech.

Food-tech innovations offer new technologies to offset disadvantages in food production. This means that consumers have more sustainable alternatives to existing products without having to sacrifice anything. One such technology for creating new food products is biotechnology. Biotechnology has been used for thousands of years to produce foodstuffs such as beer, wine, bread, and cheese. Over the past few years, however, this field has seen rapid developments that have the potential to revolutionize our food supply.

BIO.NRW therefore invited scientists and start-ups to present their vision for sustainable food production. The 133 participants listened avidly to visions of what we will find on our plates in future.

One topic that has been the focus of repeated criticism is meat production. Due to greenhouse gas emissions, land use, and water consumption, it is a significant contributor to climate change. It therefore comes as no surprise that increasing numbers of consumers are choosing alternatives. Yet, as Alexander Kolf from the Polyfoods project rightly pointed out in his presentation, “taste must come first” if the concept of eating less meat is to succeed. Polyfoods produces mycoprotein by fermentation to develop meat alternatives. Fermentative production uses less water and produces less CO2 compared to meat production. What’s more, because it uses food industry side streams, no additional agricultural land is required.

In the context of alternative meat production, cellular agriculture is also often mentioned. The resulting “meat from a Petri dish” has received a lot of media attention in the past. What’s less well known, however, is that this principle can also be applied to plant-based products. “Why would it need to come from a Petri dish if it grows in a field anyway?”, you might ask. Dr Heiko Rischer from VTT supplied the answer in his presentation. He explained that by 2050, food demand will have risen by 60 %, but only 2 % more land will be available for cultivation. In addition, climate change could mean in the future that we can no longer grow certain products, such as coffee, the way we do today. And who would want to do without coffee? Dr Rischer’s solution is to explore new food sources. Cellular agriculture has the advantage of reducing dependency on agricultural land. As an example, he talked about coffee production using cell cultures. This “beanless coffee” is a sustainable alternative to coffee beans and has already made headlines. However, the principle can be applied to a wide range of foodstuffs.

What would coffee be without chocolate? Similarly, cocoa production is not always sustainable, and in some cases it goes hand in hand with deforestation or child labour. Could there be another way? “Yes!”, say Kevin Schmitz and Anna-Lena Krug from the company QOA. Their product of the same name is produced entirely without cocoa beans – instead, their QOA powder and QOA butter are obtained through fermentation. These are then processed in place of cocoa powder and cocoa butter to create a delicious chocolatey product that looks and tastes like real chocolate. The BIO.NRW staff had the opportunity to taste for themselves and were delighted with the quality of the product.

Dr Marcel Hövels from the University of Bonn is also concerned with sweetness. As part of the IMPRES project, he is working on the biotechnological production of healthy sugar substitutes and prebiotics from sucrose and starch. Why is this necessary? Many consumers are not aware that artificial sweeteners are produced on the basis of crude oil and can also accumulate in the environment. With the aid of biotechnology, the project is developing alternatives that are sustainable as well as sweet.

When it comes to foodstuffs, however, it’s not only the taste that counts – how a product looks and the ingredients it contains are also important. Many people know carotenoids, e.g. from carrots. These are strong pigments, which as antioxidants, also have a positive effect on human and animal health. Besides their use in food, carotenoids can also be found in cosmetics or as a feed additive for farmed salmon. In his presentation, Dr Florian Meyer from Bielefeld University explained that approximately 80–90 % of carotenoids are currently produced using fossil raw materials. The biotechnological production of carotenoids is still expensive and inefficient. Dr Meyer intends to change this in the Karotec project. In his presentation, he presented the approach of producing carotenoids using Corynebacterium glutamicum. This bacterium is already used for the industrial production of food additives such as glutamate. Dr Meyer explained that the biotechnological production of carotenoids could also be integrated within a circular project in which aquaculture side streams are used as a raw material for the process. In turn, the carotenoids thus obtained could then be used as an aquaculture feed.

In a holistic consideration of sustainable foodstuffs, it is essential to look not only at ingredients, but also at packaging. The “Proteinschichten” (protein layers) project within the NewFoodSystems innovation space focuses on developing edible packaging based on proteins. One example here involves a substitution for animal sausage casings. Both the project and the innovation space were presented by Prof. Dr Sabine Kulling from the Max Rubner-Institut and Dr Alexander Stephan from VAN HEES GmbH. NewFoodSystems is another good example of the collaboration between science and industry for a sustainable economy.

The webinar showed that biotechnology can be applied in many different areas of food production. It offers sustainable alternatives for the production of nutrients and ingredients. Food products from bioreactors will therefore appear more frequently on our plates in future.

We would like to thank all of the speakers and participants for the fascinating presentations and interesting discussions. Their positive contributions were all instrumental in ensuring the workshop’s success. We would also like to thank our partner BioIndustry e. V. and the team from BIO Clustermanagement NRW GmbH for the technical implementation of the event. 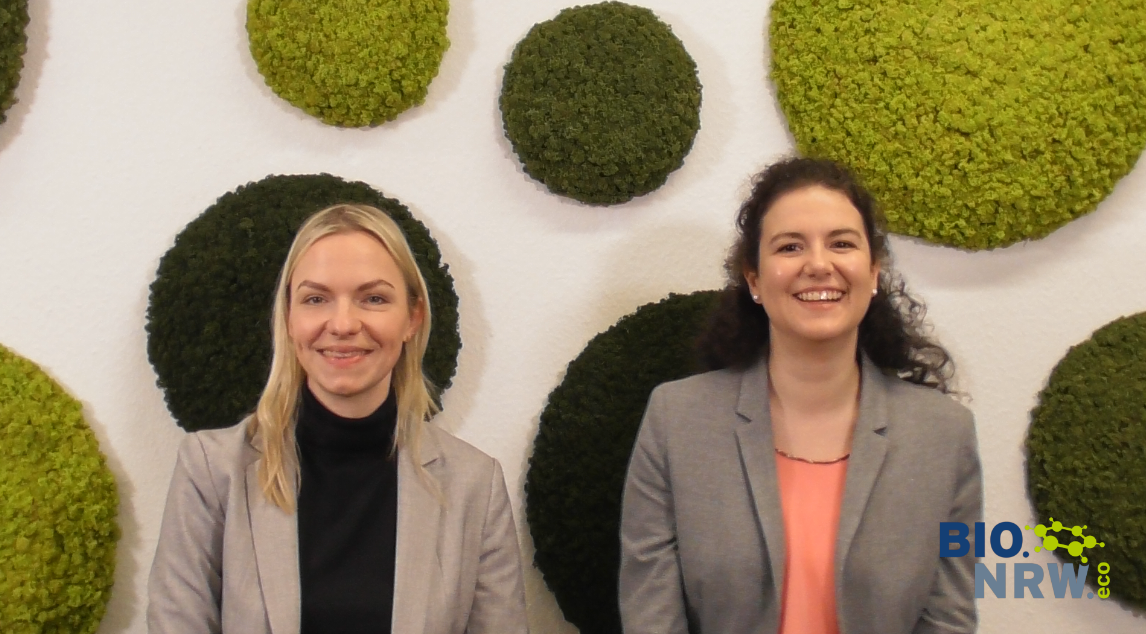